Are you interested on technology and how it is evolving towards the future?

Would you like to explore how information and communication technology can enable us to live in a more sustainable world?

Together with two friends, we started to share some perspectives on how connectivity is shaping the our world, we call it Connective Age.

Have a look here: http://connectiveage.com

"OpenIDEO is a place where people design better, together for social good. It's an online platform for creative thinkers..." OpenIDEO About us.

I first came across OpenIDEO a few months ago when I joined the challenge: "How might we use social business to improve health in low-income communities?". Immediately felt in love with the diverse background of the people and the amount of inputs coming from all over the world.

You probably want to participate in the current challenge: "How might we support web entrepreneurs in launching and growing sustainable global businesses?".

In the current phase people is showcasing "Inspirations" (things already happening around the world), then we will move to "Concepting" (where you can make your owm proposal), to finalize with a selection.

All "Challenges" are sponsored by organizations willing to take the input forward and all knowledge gathered is free to use with pride.
Posted by Juan Cajiao at 11:05 AM 1 comment:

The FIFA World Cup will be host by Brazil in 2014. The location, the infrastructure and the country brand of stability and happiness make Costa Rica a perfect location for European, African, Asian and Middle Eastern National Teams to camp before the tournament. Great opportunity.

What makes an Entrepreneur?

Data matters, but doesn't make money. Connecting with Customers does.

"I used to sit on the board of a company (for which I DID NOT invest) with a very smart and very likable CEO. This person was educated at the best US schools and had worked for a top-tier strategy consulting firm – one of the big 3. The CEO led every board meeting with vigor and the board members (sans me) were always wowed. The CEO had 60-page Powerpoint presentations analyzing every micro detail of the business. The company had less than $5 million in revenue yet we had a multi-tab spreadsheet doing activity-based costing on our customer service staff, operations and technology.

We had every chart every invented by man (or McKinsey) showing failure rates of our product, mean-times-to-repair, detailed sales forecast charts, etc. Charts. What lovely charts! I know they would have been very useful in dissected the woes of General Motors. I was the only unimpressed board member. I was the one pointing out that we were behind on our sales targets and our “Elephant Deal” that had been promised was 6 months late.

After a few board meetings I finally spoke up. I was a bull in a china shop. I said (out loud), “I sure wish that some of the time that went into these PowerPoint slides would have gone into meetings with the COO, CFO or CMO of [Elephant Customer].” The CEO had never met with any of them.

With a CEO that likable, smart, educated and accomplished it made board members squirm that I was willing to call bullshit.

I’m sure you know what happens next. We missed our sales target by more than 66% for the year but we had great slides explaining why. The next year we set the sales budget equal to the previous year’s sales budget that we had missed. We missed the next year by more than 33%. Nobody seemed shocked. The company has burned through serious cash. I complained the whole way. It was not fun. No “independent” board members seemed to care (or even comprehend the lunacy of the whole situation).

To this day I’m sure they see the situation differently. Beautiful slides by top-tier consultants have hoodwinked large companies for years and I can see why. They are intoxicating, complex, insightful and tell a great story. But in the end they’re usually just that – a story. Sometimes a fantasy.

I still really like this CEO and have deep respect for this person outside of the role of being a CEO. The “Peter Principle” says that “everybody rises to their level of incompetency.” Read this as some people who are great at analyzing to not make great doers and therefore do not make great entrepreneurs. I think many VCs have learned this the hard way when they step in to temporarily run companies as I have seen happen.

The problem with the company that I described above was that there was somebody willing to fund ongoing losses and the board continued to believe that good times were just around the corner. Maybe they’ll be proved right some day. I certainly hope so. But in the UK we used to call this “promising jam tomorrow.” I was tired of jam tomorrow. I left the board. The company never JFDI."

Mark Suster is a 2x entrepreneur who has gone to the Dark Side of VC. He joined GRP Partners in 2007 as a General Partner after selling his company to Salesforce.com. He focuses on early-stage technology companies. Read more about Mark.
Posted by Juan Cajiao at 11:59 PM 1 comment:

In a few words, it brings into remote corners of the World to people with little or none access to health services the opportunity to reach it.

Technology has the potential to provide access but more efforts are needed to close the gap between potential and reality. 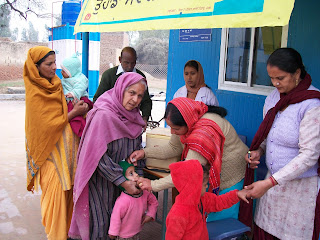 Thanks for sharing Ewelina :) - former team mate now at Ashoka.org
Posted by Juan Cajiao at 1:31 PM No comments:

Change is one of the most passionate periods in organizations.

It is about realizing that we can be better and that currently we are not.
It is about making choices, tough choices.

But overall is about clean the path for others to fulfill their potential and deliver the results we all want.

I have always being loud and explicit about what I think and I know that it works only when you seasoned it with achievements and recognition.

I am entering a new stage and the main memory that comes to my mind is the basic rule for LCPs: “set priorities, cut the sht and get it done”.

Wish me luck, we all need it, because the main challenge is to manage myself.

Posted by Juan Cajiao at 9:59 PM No comments:

Posted by Juan Cajiao at 2:47 PM No comments: